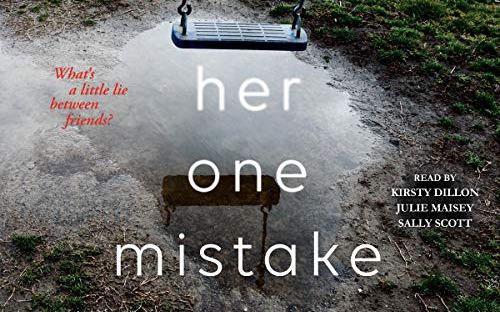 Charlotte Reynolds is taking her three young children to the school fair and has agree to let her friend Harriet Hodder’s 4-year old daughter, Alice, accompany them. This is the first time Harriet has left her daughter with anyone so this was a major event for the both of them. While the children were playing on an inflatable ride, Charlotte was keeping an eye on them from a short distance, briefly checking her phone messages and Facebook page. At some point she notices that Alice isn’t with her two oldest children anymore and has to eventually face the reality that the child is missing. It’s awful enough to lose track of your own child so imagine the anguish of losing someone else’s in your care.

This story clicked for me from the start, even though it’s more of a slowly developing one. It transitions between the present and the day Alice went missing using Charlotte’s and Harriett’s narratives. I loved this technique as it allowed me to really get to know both of these characters from their own points of view and each other’s. I felt the anguish of both women, while different for both, it was still palatable. It was difficult to not sort of judge Charlotte but what happened to her in the aftermath was reflective of our current societal environment with social media used as an outlet for others to weigh in anonymously. The damage wreaked is immeasurable no matter if the parties are innocent or don’t deserve to be judged.

Then this story takes a jaw-dropping turn that I never, ever saw coming. It shifts to a whole new set of suspense factors. Rarely am I caught this far off guard and I literally couldn’t stop listening. There were multiple narrators used and they were just excellent, completely inhabiting their characters’ personalities. I’m so happy I chose the audio format as I loved being told this story by experienced storytellers. I’m also glad I took a chance on a new-to-me author who has now increased her fan base and I’ll be checking out her backlist.