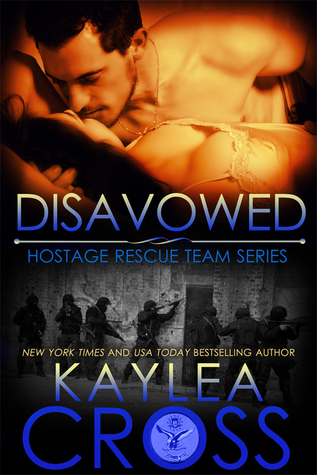 I’m reading this series with a Goodreads group. It’s a spinoff of the Titanium Security series we recently completed. I will be posting reviews every month as we read each book.

FBI Hostage Rescue Team Commander Matt DeLuca is minutes from capturing an extremely high value target in the mountains in Colorado when another presence is picked up. As they proceed on their target, they realize that person beat them by seconds. Once they capture the sniper, Matt is stunned that he recognizes her. It’s the mysterious “B” he met in New Orleans. Briar Jones is part of “The Company” and she’s also a target as someone injured her before Matt’s team arrived.

This story is all action with Matt and Briar’s developing relationship in the backdrop, which worked for me. It was made clear early on that someone from inside her agency was not only trying to kill her but damage her reputation. Being “disavowed,” a new-to-me intelligence term, meant the CIA turned against her and ordered her capture. Without the agency’s resources and with someone trying to kill her, Briar’s in serious trouble. Matt’s decision to believe and help her led to some very exciting moments and made this a tense, suspenseful reading experience.

I really liked this story and Briar’s history was beyond fascinating. The inside of the CIA was equally educational, even more mysterious and it was obvious the author did some credible research. I liked everything about this one, even though the romance heated up pretty quickly. I continue to enjoy this series that keeps its focus on the team’s missions. I’m getting exactly what I was hoping for.

15 thoughts on “Disavowed by Kaylea Cross”