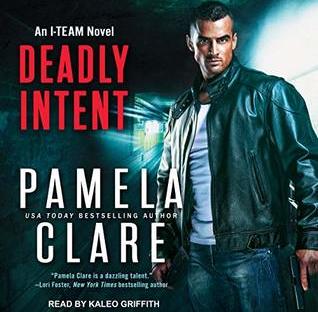 Joaquin Ramirez is the Pulitzer Prize winning photojournalist on the Denver Star’s investigative team (I-Team) who is called to what looks to be a crime scene of a missing veteran. Former Army Captain Mia Starr is also on the scene and soon becomes a suspect after it’s revealed that she was the last person to see the missing soldier and it wasn’t a friendly encounter. Joaquin is immediately intrigued by Mia who isn’t a fan of photojournalists. But, he becomes her champion when it looks like the case is on the wrong track.

I’m so glad to be back with the I-Team and listening to the fabulous Kaleo Griffith tell another of their stories. I became a fan of Joaquin from the earlier story where he was part of a disastrous Mexican trip where a fellow team member was abducted right before his eyes. His professionalism at that time led to his prize-winning work. What I loved about this story is learning much more about the man and his family. His generosity towards Mia further endeared him to me (and Mia!). Also, the sexual harassment of women in the military is explored here and the ugliness of it is on full display. It’s a relevant issue and Mia is the right character to portray what some women in the armed forces endure and how they cope.

It’s an interesting but challenging case as other soldiers are slain. Finding the connection wasn’t initially clear but the suspense certainly was always in the background. There’s an almost perfect balance between the action and romance, which was extremely sensual. And, I love how past characters are woven into this story. It’s only been three months since the Christmas assault and the aftermath is captured here. Mark Hunter and Julian Darcangelo figure prominently in the investigation, too. It’s a really good story narrated expertly by Griffith. Welcome back, I-Team! This is one of my most favorite series and this is on par with the rest.

(Thanks to Tantor Audio for a complimentary copy. All opinions are my own.)