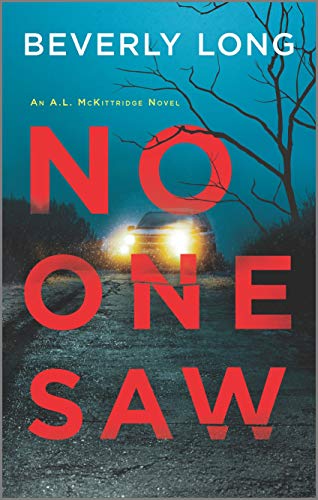 It’s one of the worst cases law enforcement can be handed…a missing 5-year old, gone without a trace. By the time Detective A. L. McKittridge and his partner Rena Morgan are notified, little Emma Whitman has been gone for hours. Her grandmother dropped her off at her daycare at 7:30 am and no one knew she was missing until her father arrived to pick her up at 6:30 pm. As A. L. and Rena race to investigate, so many of the people involved keep getting caught in lies, sending the detectives down fruitful and dead end paths. But they are all unanimous in one statement: no one saw anything.

I became a fan of A. L. and Rena after the first book and now I’m completely sold on these two. They’re very different in style and age but read each other perfectly. Even better, they respect and listen to each other. This was a hard case and the procedurals were simply outstanding, delivered at a pace fitting the situation. Once I got started, I was hard pressed to put the book aside. But the story was more than just the case as their personal lives were equally compelling. A. L.’s a divorced single dad of a teenaged daughter and has a new girlfriend (ex-wife has issues). Rena’s grappling with fertility issues and a restless husband who’s going through a career change. Shifting to those storylines wasn’t a distraction as I was just as enamored of them as I was of the search for Emma.

I really enjoyed all aspects of this story, especially as it wasn’t predictable and I hadn’t a clue of how it would be resolved. My gut choice turned out to be correct but I would be misleading you if I failed to acknowledge that I changed my mind several times. This is now considered one of my must read series and I am anxious to see what’s next for this team and the people important to them personally and professionally. It was a great story with all the right confusing angles. 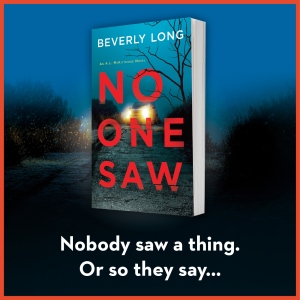 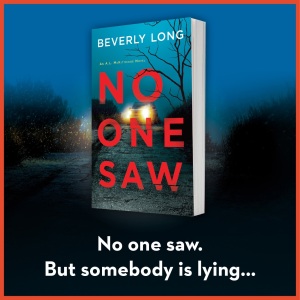 1.​Do you have any favorite authors?

There are authors that I routinely check to see if they have new books available. They include Ann Patchett, Kristin Hannah, and Lee Child.

2.​For readers who haven’t tried your books yet, how do you think your editor or loyal readers would describe your books?

The feedback I’ve received from readers is that they enjoy my books because there’s a nice balance between suspense and character development. In TEN DAYS GONE and NO ONE SAW, the focus is the investigation of the crime. But along the way, the reader gets to know the two detectives, A.L. McKittridge and his partner, Rena Morgan.

3.​Do your books have to be read in order or can they be read as standalones?

Over the years, I’ve written a number of books that have been branded as a series. However, every book has been written so that it could be read as a standalone. I personally really like to read within a series. I like starting with book one in the series and moving forward. So, that would be my suggestion but it’s not absolutely necessary.

4.​Where did the inspiration for this story come from?

I’m not sure inspiration is the right word but I am always interested in the concept of family. What makes a family? What will break a family? What secrets will family keep? How does a family change when new people are added to it? In NO ONE SAW, I wanted to write a story where a family is stretched to its very limits when a child is suddenly missing and family, the people you should lean upon the most in these circumstances, are all suspects.

5.​Will there be another book in this series?

That’s the plan. I’m currently working on the third book in the A.L. McKittridge series.

6.​How do you maintain continuity in a continuing series? Do you keep charts or anything like that to remember from book to book?

No charts but I keep a list of characters, their relationship to others, as well as any mentions of specific places. I keep too much in my head and I spend too much time rechecking things from previous books in an effort to maintain consistency. I am constantly looking for new ways to be better at this.

7.​Do you prefer to extensively plot your stories, or do you write them as they come to you?

I wouldn’t say that I plot extensively, but I certainly have a general idea of where the story is going before I start writing. Because I write suspense and police procedurals, it’s important that my stories unfold in a logical manner. Otherwise, the reader can get frustrated. Thus, that part of the story is pretty well mapped out in advance. The character development is more organic and sometimes I surprise myself at the direction the story takes. For example, when I started writing TEN DAYS GONE, I knew that I needed to give Tess Lyons, the next potential victim, a persuasive reason not to care what happened to her. That was necessary for the storyline to work. I didn’t know what that persuasive reason was going to be until I was almost halfway through the first draft.

8.​Which character do you most relate to and why?

I relate to both of the lead characters in different ways. For A.L., his trials with his teenage daughter are fun for me (and perhaps somewhat cathartic) because I’ve had teenage daughters. For Rena, she’s a woman trying to balance work, a husband, and an extended family. She wants to make good decisions about everything. Been there, done that.

9.​What has been the defining moment in your career that made you think “Yes, I am now a writer!”?

Early in my career, I sold a couple books but then there was a period of years where I wasn’t able to sell. I didn’t give up. I kept writing. I finished four manuscripts during this time. That’s when I knew for sure. Ultimately, I started selling again and I was very glad I had built up an inventory of work because I was able to meet the demands of a publisher who was very interested in getting my stories into the hands of readers.

10.​What advantages or challenges does a writer in your genre face in today’s fiction market?

When writing thrillers and specifically police procedurals, technology and our ever-increasing instant access to data can quickly derail a storyline. No longer can a character realistically remain in the dark too long without the reader impatiently thinking “why not just look that up on your phone?”

11.​What can you tell us about your next project?

Detectives A.L. McKittridge and Rena Morgan are back at it. This time it’s personal for A.L. because the murder victim is someone he knows and his father and his Uncle Joe are both suspects.

12.​Has quarantine been better or worse for your writing?

Early on during quarantine, I wasn’t writing as much as usual. I spent too much time watching and reading the news. But after a while, I was able to do less of that and get back into a routine of writing every day. I really do miss taking my laptop to a coffee shop and look so forward to the days when I can do that again.

I had the pleasure of joining a book club several years ago and, as a result, have had the opportunity to read books that would likely not have otherwise made it to my bedside table. For example, I read, Empty Mansions: The Mysterious Life of HUGUETTE CLARK and the Spending of a Great American Fortune by authors Bill Dedman and Paul Clark Newell, Jr. The story was fascinating and so different than anything I normally read. 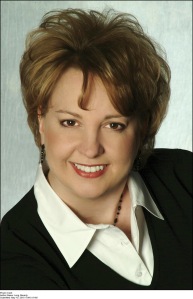 Beverly Long’s writing career has spanned more than two decades and twenty novels, including TEN DAYS GONE, the first book of her A.L. McKittridge series. She writes romantic suspense with sexy heroes and smart heroines. She can often be found with her laptop in a coffee shop with a cafe au lait and anything made with dark chocolate by her side.

13 thoughts on “Blog Tour: No One Saw by Beverly Long”