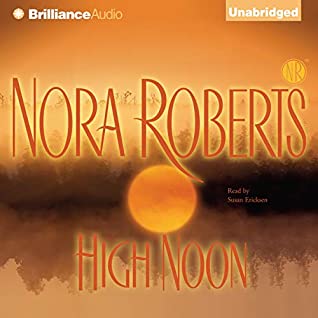 Lieutenant Phoebe Swift is a hostage crisis negotiator with the Savannah-Chatham Police Department and we’re introduced to her when she shows up at the scene where a despondent man is threatening to jump from a ledge. What’s important about that moment is we get to see her in action early on, getting insight into her skills, and meet Duncan Swift, the bar owner who was friends with and employed the jumper. He’s immediately taken with the feisty Phoebe and makes it his mission to get to know her better. In the meantime, Phoebe’s problems with a troublesome police officer in her ranks escalates to something awful. When later it’s determined she’s the focus of a stalker, things get dangerous for her and those close to her heart.

I’ve wanted to read this story since forever and have recommended it as a group read countless times and it was finally chosen this month. It’s an older one of Roberts’ suspense standalones, written over ten years ago but does not feel dated at all. Phoebe has so many wonderful qualities and I liked that she had imperfections. She’s a single mother having to be the leader of her extended family. The scenes sharing her troubled but formative childhood were as compelling as those in the present. The threats to her life were extremely harrowing and provided a level of tension that hung in the background for most of the story. The secondary characters, both those connected to Phoebe and Duncan, are crucial to the story, all having important roles. They added so much texture to the storyline.

I also liked Phoebe’s relationship with Duncan. He was witty and genuine, seemingly perfect for the elusive Phoebe and he knew how to stick. I chose to listen to the story as Roberts seems to have the best narrators for her books. I don’t listen to the In Death series so hadn’t heard Susan Ericksen’s narration of Roberts books but now see what all the fuss is about. Her performance was outstanding, especially when doing the hostage negotiations scenes. She lifted the story off the pages. I loved everything about this book and Ericksen’s narration. Hated to see it end.