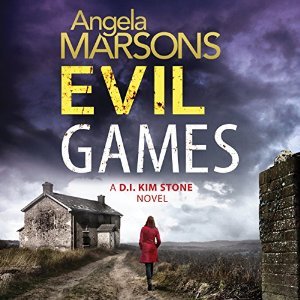 Detective Inspector Kim Stone and her team begin by taking down a child molester, in his own home. He’s the father of two who is beyond being suspected of sexually assaulting his 8-year old daughter. Next they’re called to the scene of the murder of a convicted rapist and unfortunately the primary suspect is his victim. However, something seems off about it to Kim and it eventually pits her against what will be her most formidable challenge. Dr. Alexandra (Alex) Thorne is a psychiatrist who may be playing much more than mind games.

I’ve read a lot of evil in my crime fiction but Alex North has made my top ten list. I’m not prepared to see Kim Stone be off balance, questioning her instincts but here she is doing just that. As the cases start piling up with patients tied to Alex, Kim just can’t shake off that gut instinct that we are all born with. However, it doesn’t help that she’s alone in her thinking.

This is the most aptly named story and I was mesmerized, not only because the story was downright intriguing but because I was worried for Kim. It went down twisty, mind scary paths, which all led to one exciting conclusion. It wasn’t all hard angles, though, as there is a nice and warm side story that just feels good. As if this wasn’t enough, there’s a big surprise at the end that was a jaw dropper. In retrospect, the clues were there but I’m not Kim Stone. I loved everything about this one, even my discomfort, made even more acute by the fantastic narrator. I’m beginning to understand the hype about this series and I will continue listening to the stories going forward.