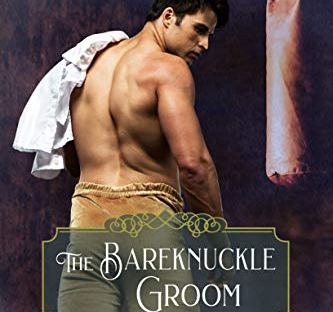 James Thompson is the protector of his family, now living in Philadelphia having immigrated from Scotland. He’s also the undefeated Bareknuckle champion, fearless and successful without a thought to any of that ending. He’s enjoying the life of a charismatic bachelor and isn’t concerned with settling down on any level. But then the cool and aloof socialite Lucinda Vermeal crosses his path at his sister’s party, giving him the proverbial cold shoulder he’s not used to receiving. She’s independent, well educated and weary of the well bred but dull men of her set with whom her wealthy father is determined to have her marry. No one would consider this a heaven made match but both can’t seem to get the other out of their heads.

Let me say right upfront that I’m not a boxing fan, far from it, so I began this story with some trepidation. The bout that had James considering his long term future was realistically portrayed, bringing forth all that is brutal about the sport. But it was essential to the heart of the story when James sets his own heart and sights on Lucinda as she struggles to ignore her strong attraction and growing feelings for him. Their paths cross often because of his sister’s station in society and despite their attempts to portray otherwise, their mutual attraction is obvious to everyone, including her disapproving father. But James’ decision to stay in boxing is the true barrier between them, even more than societal station.

I really enjoyed this story, loving the way both characters were designed and developed as both defied stereotypes of their positions. James was obviously a beast in the ring but he’s also well bred and educated. Their romance was a slow brew, as it should be, and I enjoyed their banter. There were also other subplots involving people close to James and Lucinda, which made this an even more layered and interesting story. While the boxing aspect made me uncomfortable, it was well portrayed and was a vital element to the story. I’m liking the direction of the series and love that it’s a historical set in America.

5 thoughts on “The Bareknuckle Groom by Holly Bush @hollybushbooks”