Partner Track  is a streaming series adaptation of the book of the same name by Helen Wan. It’s a legal drama centered on Ingrid Yun, a young lawyer struggling to maneuver and climb the proverbial corporate ladder to partner at a top New York law firm while maintaining her moral compass. It was developed by Georgia Lee and stars Arden Cho. Partner Track was released August 26 on Netflix.

The book was released in 2013 and is not the one I recently read (thank goodness) but the themes are strikingly similar, just better executed. In the book, Ingrid is Chinese-American but is Korean American in the series. It has an extremely diverse cast and tackles a range of issues related to gender, racism, identity and workplace dynamics. It’s been described as Sex and the City meets Suits and after finishing, I have to agree. It has the modern styling and close-knit friend group of the former and the rapid-fire delivery of dialogue similar to the latter.

I wasn’t wowed by the first episode but loved the relationship between Ingrid and her two besties, Rachel and Tyler. All three are on the partner track but work in separate practices within the same firm so they’re not competing with each other. But as the series progressed, I got hooked by the complexities of the various storylines. I’m a big fan of multiple plot lines and if that’s your interest, you’ll quickly get drawn into this series.

Whoever was responsible for casting outdid themselves. Some faces were familiar but for most of them, they were fresh actors who clearly embodied their characters. Ingrid is “perfect” in many ways and has strived for excellence all of her life. But she’s imperfect in her relationships, sacrificing them at times for her career. Her job and own objectives often put her in moral conflict, not always choosing her friends and family at those crossroads. 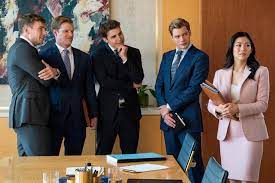 I normally don’t like love triangles (someone I like has to lose) and that doesn’t change here. However…it works in the story no matter how much I despise them because it’s a major part of Ingrid’s truths and paths to understanding herself. It’s a teachable path…for herself.

The series ends with a cliffhanger but no word yet on a Season 2. Given that it was in the top ten watched programs on Netflix the week it debuted (#5), it’s a strong possibility that it will be back. I’m definitely in if that happens. If it doesn’t, I’m okay with where the ending left me.

While I didn’t read the correct book that this series is based on, I did read comparisons and most believed it served the book well. The series portrays issues relevant to workplace and those of the characters of color powerfully and authentically, no matter how painful. No one emerges as truly righteous or evil and the writers did a laudable job in presenting all sides, in my opinion. I was completely absorbed in the episodes and binge watched the last five. Thumbs up.