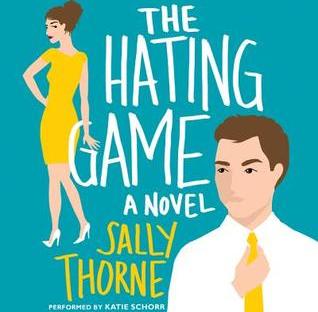 The aftermath of the grudgingly put together merger of two publishers created two co-CEOs with their own personal assistants who sit adjacent to each other in silent (mostly) animosity. Lucy Hutton and Joshua Templeman are protectful of their respective CEOs and never miss an opportunity to one-up each other in any way. Things ratchet up when they’re placed in direct competition for a new job but when circumstances thrust them together outside of the office, Lucy and Josh are forced to see each other beyond the snarling and sneering.

Lucy tells the story and her perspective couldn’t be more entertaining. She’s smart, funny and clever but has a penchant for needing to be liked and that’s her driver. Joshua is moody, broody and his barbs always are on target and cut deep. The dialogue is pithy and well crafted. Their relationship shift was delightfully slow, both gradually seeing other dimensions in each other. His nickname for her could be construed either way as endearing or condescending so it was all about context.

Katie Schorr’s narration perfectly captured Lucy, making her so vivid that she sprang through my earphones. Unfortunately, she wasn’t able to add enough distinction for most of the other characters, most specifically Joshua, and I often couldn’t keep up with the transitions between the two. It wasn’t a big enough deal to minimize my enjoyment, however, because her perfection with Lucy eclipsed any shortcomings.

I loved this story as it was highly entertaining and so well written. The pacing could be breakneck when it was demanded and painfully slow in those situations where you needed it to be. For a debut novel, this was exceptional.