Midwife Sarah Brandt is taken to what she first believes is a boardinghouse for women to help with an imminent delivery for one of the residents. It soon dawns on her that the house is a brothel and her patient asks for her help to escape. She’s given the name of a woman known to help young women like her patient. Sarah agrees to do so and visits the woman, Vivian Van Orner, and gets in deeper than she’d envisioned, enough that she gets a visit from Detective Sergeant Frank Malloy.

One of the staples of this series is the introduction of some new factoid, at least new to this reader. This time it’s seven houses on West 25th Street in New York City called Sisters’ Row, all brothels run by seven sisters and considered to be the most expensive bordellos in the city. One of these houses was the site of our fictional story. Another frequent reference was to the “Gibson Girl” look worn by one of the women. I’d heard of it before but wasn’t familiar with the look until I saw a representation (see below). 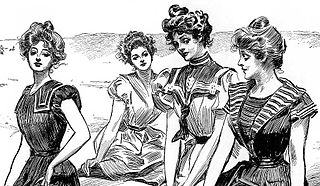 The story itself was equally interesting, especially when Mrs. Van Orner ends up dead. There’s no shortage of suspects and I changed my pick several times, only to miss the true villain entirely. Sarah and Frank worked as a team, this time at his request! I liked how they planned out the investigation and assembled the clues to hone in on the killer. And, Sarah showed some real skills in this one. This series continues to keep me entertained and excited to start the next story.

I’m reading this series with a Goodreads group. Join our discussion!

20 thoughts on “Murder on Sisters’ Row by Victoria Thompson”