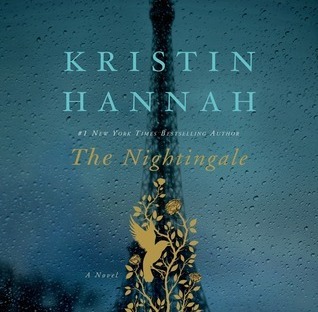 The story begins right before the German occupation of France in 1940 and continues through the Allied liberation but told retrospectively by one of the two main characters in 1995. The focus is on two sisters, Vianne Mauriac and Isabelle Rossignol, who couldn’t differ more in disposition and outlook about the war. Through their eyes and voice, we’re given a unique view of life in occupation for French residents who weren’t Jewish and their roles in the Resistance.

Most are familiar with the cruelties of the Nazi SS and the Gestapo but this story’s focus was on how ordinary French people reacted to the takeover of their livelihood and liberties. Isabelle’s and Vianne’s differences in approach probably best represented most of their fellow countrymen and women. I also liked how women were portrayed so prominently in supporting the resistance. There was a line in the book about why their stories weren’t mainstreamed and the response was something like, “Men tell stories, women just pick themselves up and move on.”

Of course this story had many heartbreaking moments but there are almost as many moments of triumph and courage. The story caused me to examine myself more critically, wondering how I would have behaved in those circumstances. The narration was so outstanding, giving distinctive characterizations to a varied and large cast. It was a vivid performance and I don’t think I’ll ever forget Vianne and Isabelle.

The film adaption is scheduled for release in August 2019

48 thoughts on “The Nightingale by Kristin Hannah”