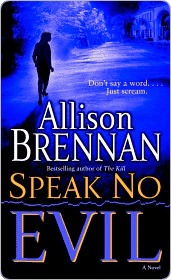 The Lucy Kincaid series was selected as a group read in one of my Goodreads groups and we decided to read this trilogy first as the character’s early family background begins here. This is the first book in the No Evil Trilogy

San Diego Homicide Detective Carina Kincaid is called to the scene of the gruesome murder of 18-year old college student Angie Vance. Her mouth was glued shut and she was wrapped in garbage bags with vile slurs covering her body. When her ex-boyfriend emerges as a prime suspect, his brother, Montana Sheriff Nick Thomas, comes to support him only to develop his own suspicions about Steven. But, that suspicion helps get Nick on Carina’s investigation team as they work to identify and stop what looks to be an emerging serial killer.

One of the things that works about this story is having the point of view of the killer, though unidentified. It helps as you compare and contrast the investigation with the killer’s actions and thinking. It’s chilling but makes it a compelling reading experience. I liked Carina a lot as she’s smart, resourceful and still maintains her femininity. Nick is recovering from injuries he received while helping to track and capture his own serial killer monster, The Butcher (see the Predator Trilogy), and while he’s got some serious baggage emotionally and physically, he rises above it and brings much needed skills to the team. I liked him as well, especially how he managed his vulnerabilities and maintained his professionalism. Both were well crafted and I felt I got to know them well and they never faltered from their characterizations.

The balance is tilted to the suspense elements but that doesn’t mean the romance suffered. Carina and Nick were seriously attracted to each other and I liked how that was worked into the story without interfering with the job. The case was a tough one, including the details of the murders. It took me almost the course of the book to figure things out and the procedurals were strong. I really liked the story and this first book in what promises to be a good series. Carina’s brothers, Dillon and Patrick, were nicely introduced and I look forward to reading their stories.

26 thoughts on “Speak No Evil by Allison Brennan”