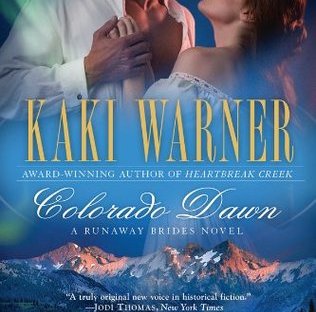 Englishwoman Madeline (Maddie) Wallace married Scotsman Angus Wallace six years ago and he promptly left to fight England’s wars, leaving her with his family. After four years, two letters and one visit, Maddie decides to come to America’s western frontier when she’s offered a job capturing the territory through her photography. It’s been two years and she’s now a highly successful photographer living in Heartbreak Creek, Colorado with a new life and good friends. Angus Wallace returned to his family home after recovering from serious injury only to find most of his relatives had died, one brother standing between him and being the lord of the family line and his wife gone. He’s now the Viscount of Ashby and needs to find Maddie quickly to return her to Scotland.

I must admit I didn’t think Angus could redeem himself after having left Maddie alone for so many years but he managed to do so. Despite their being married, Angus and Maddie needed to acquaint themselves with each other as if they were meeting for the first time. I loved that we got his narrative and saw him transform from an entitled husband to someone who came to respect Maddie’s talents and her personally. And, we got to see his playful and honorable side. As for Maddie, I liked her in the first story and grew to love her spirit, vitality and honesty in this one. These two belonged together and found a way to make it work.

I loved this story and while many preferred the first book, this one was more special in my opinion. Maddie became an acclaimed photographer during a time when something like this was impossible for women. The author captured the magic of her talent and how it was a part of her identity. I also loved how her relationship with Angus was handled. What appeared to be a black and white issue ended up being laced with a lot of gray and he became sympathetic. There was also a thriller element to keep things even more interesting. This was a really good story on so many levels.