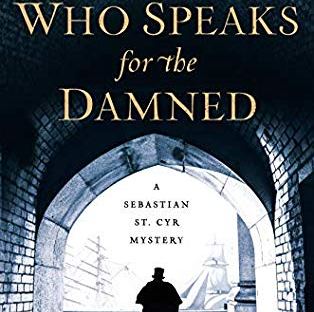 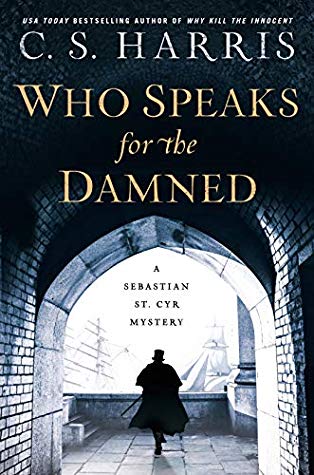 The Allied Sovereigns have assembled in London to celebrate the defeat of Napoleon in June 1814. Royal families from the German states, Russia and Austria are reveling in the restoration of the European monarchs. In the midst of all the festivities, the body of Nicholas Hayes, a British noble, was discovered in a tea garden. He was thought to have died 15 years earlier in Botany Bay where he was sentenced for the murder of the wife of a French emigre. Hayes was a friend of Jules Calhoun, Sebastian St. Cyr’s valet, who had Sebastian accompany him to the murder scene. Sebastian soon discovers that his own interest goes beyond helping out a friend as the investigation calls into question Hayes’ guilt for the crime that originally banished him from England.

I’ve loved this series for its historical accuracy, forthrightness and honesty about the past. It’s unparalleled in that respect, at least among my other historical fiction choices. This story surpassed my high expectations in this aspect as well as providing high intrigue and a downright confounding mystery. My education about the East India Company was apparently a farce and I learned the reality of its sordid history and devastating impact on Asian cultures. Hayes murder was cleverly entwined with the political machinations involving Allied relationships following Napoleon’s downfall, which had me paying attention to minute details and the intricacies of key relationships. If this wasn’t enough to engage me, Sebastian was teamed with Hero to work through many elements of the case, past and present.

This was the most delectable of installments to date, at least for me. Nicholas Hayes’ life was sort of a “what if” representation for Sebastian as so much of their early lives mirrored each others except for the intervention of Constable Henry Lovejoy saving him from a similar fate at a similar pivotal moment in his own life. It inspired him to seek the truth on Nicholas’ behalf as there was absolutely no one to stand for him. There’s always been a noble quality about Sebastian beyond peerage and he’s never been finer than he was here in seeking the truth amidst incredible opposition. I loved everything about this story as it cleverly and skillfully steeped well defined characters, intrigue, mystery and suspense in a wealth of history. And the ending? Beyond lovely.

21 thoughts on “Who Speaks for the Damned by C. S. Harris”