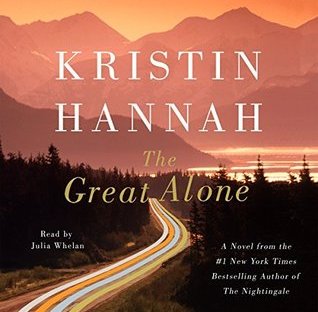 The year is 1974 and Ernt Allbright comes home from the Vietnam war a very different man after having been a POW. He’s volatile, impulsive and can’t hold a job. He often takes it out on his young wife, Cora. His 13-year old daughter Leni has learned the warning signs when her father’s mood is about to change and prepares accordingly. They are living in Seattle and pretty destitute when he receives a letter from the family of one of his friends from the war, notifying him that their deceased son left him land in Alaska. Ernt sees this as an opportunity to start anew and provide for his family and they move. Thus begins a turning point in their lives but it’s not the success story they’d hoped for.

Alaska is as much a character in the story as it is the setting. Hannah manages to simultaneously portray the beauty, majesty and cruelty of the state and it has a profound effect on Leni. As tough as their lives are in their new home, both the dangers inside and out, she develops a love for the nature, embracing every aspect of it. It shapes her and becomes part of her soul. As sympathetic as I was to Ernt’s obvious challenges due to severe PTSD, it wasn’t the only explanation for his abusive behavior. He was a cruel and mean man who carefully plotted aggressions against his family and others who didn’t share his points of view. Cora is more than the classic abused wife who won’t leave her husband. She married young and was pregnant at the time. This man was part of who she was and their dysfunctional relationship superseded every other one in her life, with the exception of her daughter.

The true heroine of the story is Leni. Despite her awful childhood, she emerges with a strong sense of self and an appreciation of her environs that became a part of her identity. Hannah was masterful in how she crafted this character. As the story is told through Leni’s eyes and voice, she made me feel what she felt and I’ve never felt a call to this state. She sifted through the brutal weather, unending darkness and harsh way of life to see the absolute beauty of the land and spirit of the people who chose that way of life. The strong sense of community was enviable and I walked away from this story with a much better understanding of why that land calls to so many people despite the difficulties of living there. This was an amazing story and who better than Julia Whelan to narrate it. She delivered an outstanding performance on every level. There’s one particular scene that brought me to tears that I can still hear. I wish I could describe more but it’s too spoilerish so you’re going to have to listen for yourself. I’m still haunted by the story, the characters and, most profoundly, the land we know as Alaska.

38 thoughts on “The Great Alone by Kristen Hannah”