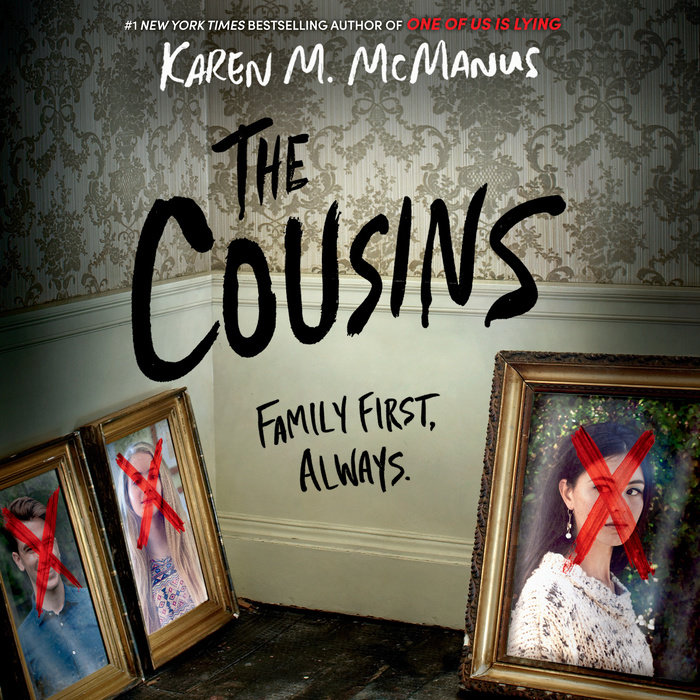 Milly, Aubrey, and Jonah Story are cousins, but they barely know each another, and they’ve never even met their grandmother. Rich and reclusive, she disinherited their parents before they were born. So when they each receive a letter inviting them to work at her island resort for the summer, they’re surprised . . . and curious.

Their parents are all clear on one point–not going is not an option. This could be the opportunity to get back into Grandmother’s good graces. But when the cousins arrive on the island, it’s immediately clear that she has different plans for them. And the longer they stay, the more they realize how mysterious–and dark–their family’s past is.

The entire Story family has secrets. Whatever pulled them apart years ago isn’t over–and this summer, the cousins will learn everything.

Thanks to Inge @ The Belgian Reviewer for this one. Somehow I’d overlooked this one, available on audio at my library.

Kristen Peterson doesn’t do drama, will fight to the death for her friends, and has no room in her life for guys who just don’t get her. She’s also keeping a big secret: facing a medically necessary procedure that will make it impossible for her to have children.

Planning her best friend’s wedding is bittersweet for Kristen — especially when she meets the best man, Josh Copeland. He’s funny, sexy, never offended by her mile-wide streak of sarcasm, and always one chicken enchilada ahead of her hangry. Even her dog, Stuntman Mike, adores him. The only catch: Josh wants a big family someday. Kristen knows he’d be better off with someone else, but as their attraction grows, it’s harder and harder to keep him at arm’s length.

The Friend Zone will have you laughing one moment and grabbing for tissues the next as it tackles the realities of infertility and loss with wit, heart, and a lot of sass.

This showed up at my library, on audio, so I decided to give it a try, despite the mixed reviews..

Edward Fosca is a murderer. Of this Mariana is certain. But Fosca is untouchable. A handsome and charismatic Greek Tragedy professor at Cambridge University, Fosca is adored by staff and students alike—particularly by the members of a secret society of female students known as The Maidens.

Mariana Andros is a brilliant but troubled group therapist who becomes fixated on The Maidens when one member, a friend of Mariana’s niece Zoe, is found murdered in Cambridge.

Mariana, who was once herself a student at the university, quickly suspects that behind the idyllic beauty of the spires and turrets, and beneath the ancient traditions, lies something sinister. And she becomes convinced that, despite his alibi, Edward Fosca is guilty of the murder. But why would the professor target one of his students? And why does he keep returning to the rites of Persephone, the maiden, and her journey to the underworld?

When another body is found, Mariana’s obsession with proving Fosca’s guilt spirals out of control, threatening to destroy her credibility as well as her closest relationships. But Mariana is determined to stop this killer, even if it costs her everything—including her own life.

I learned of this from the publisher’s newsletter, scheduled for release in June. I was a fan of The Silent Patient by Alex Michaelides so I’m all in for this one. A library audio hopeful. 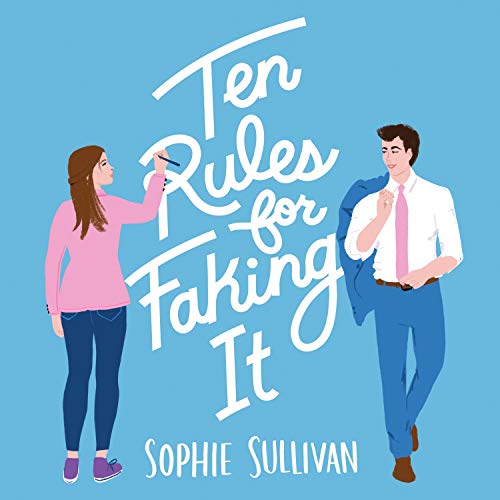 What happens when your love life becomes the talk of the town? As birthdays go, this year’s for radio producer Everly Dean hit rock-bottom.

Worse than the “tonsillectomy birthday.” Worse than the birthday her parents decided to split (the first time). But catching your boyfriend cheating on you with his assistant?

But this is Everly’s year! She won’t let her anxiety hold her back. She’ll pitch her podcast idea to her boss.

Her boss, Chris, is very cute. (Of course). Also, he’s extremely distant (which means he hates her, right? Or is that the anxiety talking)?

And, Stacey the DJ didn’t mute the mic during Everly’s rant about Simon the Snake (syn: Cheating Ex).

Suddenly, people are lining up to date her, Bachelorette-style, fans are voting (Reminder: never leave house again), and her interest in Chris might be a two-way street. It’s a lot for a woman who could gold medal in people-avoidance. She’s going to have to fake it ‘till she makes it to get through all of this.

Perhaps she’ll make a list: The Ten Rules for Faking It.

Because sometimes making the rules can find you happiness when you least expect it.

I’d decided to give this one a pass but then read the review by Tessa @ Tessa Talks Books and changed my mind completely. I’m hoping the audiobook shows up at my library.

When Johnson was born, social norms and her government-issued birth certificate said she was Negro, nullifying her mother’s white blood in her identity. Later, as a Harvard-educated business executive feeling too far from her black roots, she searched her father’s black genealogy. But in the process, Johnson suddenly realized that her mother’s whole white family was—and always had been—missing. When she began to pry, her mother’s 36-year-old secret spilled out. Her mother had simply vanished from Indiana, evading an FBI and police search that had ended with the conclusion that she had been the victim of foul play.

This showed up at my library and I found it intriguing. I opted, of course, for the audio version.

Autumn of 1987 takes a young couple on a romantic trip in the Westfjords holiday – a trip that gets an unexpected ending and has catastrophic consequences.

Ten years later a small group of friends go for a weekend in an old hunting lodge in Elliðaey. A place completely cut off from the outside world, to reconnect. But one of them isn’t going to make it out alive. And Detective Inspector Hulda Hermannsdóttir is determined to find the truth in the darkness.

Ragnar Jonasson burst onto the American scene with Snowblindand Nightblind, the first two novels in the Ari Thor thriller series, and the praise was overwhelming. With The Darkness, he launched a new series featuring a completely new sleuth, Detective Inspector Hulda Hermannsdottir of the Reykjavik police department.

Haunting, suspenseful and as chilling as an Icelandic winter, The Island follows one woman’s journey to find the truth hidden in the darkest shadows and shine a light on her own dark past.

I recently got the first audiobook in the series from my library and this also became available. My library rocks!

A dark history lingers in Chapel Croft. Five hundred years ago, Protestant martyrs were betrayed — then burned. Thirty years ago, two teenage girls disappeared without a trace. And a few weeks ago, the vicar of the local parish hanged himself in the nave of the church.

Reverend Jack Brooks, a single parent with a 14-year-old daughter and a heavy conscience, arrives in the village hoping for a fresh start. Instead, Jack finds a town rife with conspiracies and secrets, and is greeted with a strange welcome package: an exorcism kit and a note that warns, “But there is nothing covered up that will not be revealed and hidden that will not be known.”

The more Jack and daughter, Flo, explore the town and get to know its strange denizens, the deeper they are drawn into the age-old rifts, mysteries, and suspicions. And when Flo begins to see specters of girls ablaze, it becomes apparent there are ghosts here that refuse to be laid to rest.

Uncovering the truth can be deadly in a village with a bloody past, where everyone has something to hide and no one trusts an outsider.

I discovered this new title after reading the latest post by Marialyce & Jan @ yayareads! I’m excited and this is an audio review hopeful.

The Bookshop on the Corner
Nina Redmond is a librarian with a gift for finding the perfect book for her readers. But can she write her own happy-ever-after? In this valentine to readers, librarians, and book-lovers the world over, the New York Times-bestselling author of Little Beach Street Bakery returns with a funny, moving new novel for fans of Meg Donohue, Sophie Kinsella, and Nina George’s The Little Paris Bookshop.

A grand baronial house on Loch Ness, a quirky small-town bookseller, and a single mom looking for a fresh start all come together in this witty and warm-hearted novel by New York Times bestselling author Jenny Colgan.

The Bookshop on the Shore
Desperate to escape from London, single mother Lottie wants to build a new life for herself and her son Raffie. She can barely afford the crammed studio apartment on a busy street where honking horns and shouting football fans keep them awake all night. If she doesn’t find a way out soon, Lottie knows it’s just a matter of time before she has a complete meltdown. On a whim, she answers an ad for a nanny job in the Scottish Highlands, which is about as far away from the urban crush of London as possible. It sounds heavenly!

The job description asks for someone capable of caring for two…well, the advertisement says “gifted children”; the reality is more like “feral wolverines.” The children’s widowed father is a wreck, and the kids run wild in a huge tumbledown castle on the heather-strewn banks of Loch Ness. Still, the peaceful, picturesque location is everything London is not—and Lottie rises to the challenges of the job.

With the help of Nina, the friendly local bookseller, Lottie begins to put down roots in the community. Are books, fresh air, and kindness enough to heal this broken family—and her own…?

500 Miles From You
Lissie, is a nurse in a gritty, hectic London neighborhood. Always terribly competent and good at keeping it all together, she’s been suffering quietly with PTSD after helping to save the victim of a shocking crime. Her supervisor quietly arranges for Lissie to spend a few months doing a much less demanding job in the little town of Kirrinfeif in Scottish Highlands, hoping that the change of scenery will help her heal. Lissie will be swapping places with Cormack, an Army veteran who’s Kirrinfeif’s easygoing nurse/paramedic/all-purpose medical man. Lissie’s never experienced small-town life, and Cormack’s never spent more than a day in a big city, but it seems like a swap that would do them both some good.

In London, the gentle Cormack is a fish out of the water; in Kirrinfief, the dynamic Lissie finds it hard to adjust to the quiet. But these two strangers are now in constant contact, taking over each other’s patients, endlessly emailing about anything and everything. Lissie and Cormack discover a new depth of feeling…for their profession and for each other.

But what will happen when Lissie and Cormack finally meet…?

I was actually intrigued by the third book in this series, which had me look into the previous two. Thanks to my library for the audio versions of all three!

15 thoughts on “Saturdays at the Café”