Theresa Pressley has just moved from Philadelphia to the Ivy Woods neighborhood, somewhere in suburban Virginia outside of Washington, D.C. Her husband, Adam Wallace, is the new principal at the local high school where their daughter also is attending. Their house is on Ivy Woods Lane in a coveted cul-de-sac, one where Theresa had always dreamed of living. It doesn’t take long for her to meet the women who are considered the “in crowd,” led by Kendra McCaul, the queen bee of the Ivy Five. But curiously there are only four and it feels like she’s being recruited to replace whoever used to be that fifth.

The story is told from the points of view of Theresa, Kendra and a third voice who isn’t revealed until late in the story. It didn’t take me long to question if my narrators were reliable. Kendra is famous for her annual big Halloween block party and everything is leading up to that event. You’re not sure what’s going to happen and that’s also part of the suspense build up. It’s clear early on that there’s more to Theresa than what you see on the surface and it’s a slow unraveling of her past that provides more insight into the dynamics of what’s to come. Kendra definitely has earned her position as leader of this suburban hive and she lives up to it in every moment. It’s also obvious that she and her posse are protecting a big secret.

There’s definitely a Big Little Lies vibe here but not quite as intricate. One event from the past is the driver of the story and it’s that unidentified narrator that provides the drama. I listened to the story and her cynicism and snark were pitch perfect, setting the right tone for this person. I was really happy that three separate narrators were used as it made it so much easier to identify who was speaking because of the many transitions. All delivered wonderful performances and made this story even better. I’d guessed a lot about Theresa and what happened in the past but there still were some interesting twists I didn’t foresee. I really enjoyed this creepy, meandering suburban drama that kept me guessing and trying to figure things out until the end. Perfect story for the Halloween season.

HarperAudio US · THE MOTHER NEXT DOOR By Tara Laskowski

HALLOWEENLadies and gentlemen, skulls and boys: by the time our Halloween block party is over tonight, one of us will be dead.
And I don’t mean dead as in dull, or dead as in zombified. I mean dead as in gone. Dead as in expired. Killed.
Murdered.
You may be feeling distressed about this, knowing what you know about Ivy Woods—the great neighborhood it is, the sweet, loving families that live there. How could such a tragedy happen in such a wonderful place? You may have traveled here yourself, as a child or as a parent, lured in by the local fame of the street and its ghoulish decorations each year. The lights, the smoke, the gravestones, and the moaning. The witches, cackling and handing out candy. The swarms of little Frankensteins and cowboys and robots and ballet dancers lugging their pillowcases and plastic pumpkin buckets filled with sugar and junk.
But Ivy Woods isn’t perfect.
Far from it.
Look closer. Look under the makeup and the masks, look into the windows of the perfect houses. Dig under the surface of those freshly mowed lawns and you’ll find the worms. I’ve looked—believe me, I’ve looked. There’s something about this street. There are secrets. I know from watching through the windows, from hearing the hushed conversations, from lingering on their faces when they think everyone else has looked away.
Oh they think they are perfect. They pat themselves on the back for throwing such good parties, for raising such fine children, for living in such big houses.
But they are pretending.
They don masks on this one single night to dress up as someone or something else, but in reality they live their lives this way.
We all do.
We hate ourselves. We are too fat, or too thin. We should work hard, be smarter. We are lonely and depressed. We are worried about money. We are ashamed of the way that our friends and family treat us. But we lie about it all. We hide behind a protective façade, fragile glass figurines inside elaborate dollhouses designed to look like perfect, safe, happy places.
Tonight it will all shatter.
Watch closely and you’ll begin to see what I see. There’s trouble in the air, a cold wind blowing in from far away, and it’s settled on Ivy Woods Drive. The secrets and the lies we tell ourselves and others will emerge tonight like spirits of the dead. Lines will be drawn. Sides will be taken. Someone won’t make it out alive.
I can’t save that person, but I’ll tell the story. Turn over the rocks, expose the worms. Pull back the masks.
Because I know their secrets, secrets that will destroy them all.
If they don’t destroy themselves first.Excerpted from The Mother Next Door by Tara Laskowski, Copyright © 2021 by Tara Laskowski. Published by Graydon House Books. 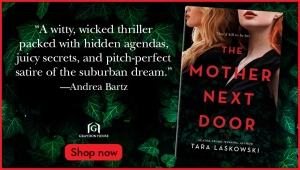 Q & A with Tara Laskowski

Q: Please give us a one sentence pitch for your novel, The Mother Next Door.
A: An atmospheric suspense novel about a tight-knit group of suburban mothers who invite a new neighborhood mom into their fold, and the fallout the night of the annual Halloween block party, when secrets from the past come back to haunt them.

Q: Why do you believe thrillers are so popular?
A: They naturally invoke our curiosity–our sense of “I have to know what happens.” Plus, I think people like to read about bad things happening to other people. It’s the same with horror movies or books–it’s a fun way to put yourself in a terrifying situation without actually having to be in a terrifying situation. As long as our brains know we are safe, we can enjoy that rush of adrenaline without the sheer panic.

Q: Where do you get your ideas? Of course, from your imagination, but do you read, see or hear something that clicks? How did you come up with the idea for The Mother Next Door? Is this book based on any true events?
A: I usually start with setting, weirdly. I need a place that I can envision, and that I can see bad things happening in. If I’ve got the place, then I can insert characters and make things happen.

For The Mother Next Door, I took all of the things I love most–Halloween, cool houses, urban legends–and put them in a domestic suspense set in a creepy suburban neighborhood. The book isn’t really based on any true events, but it definitely riffs off stuff in my real life. We live in a neighborhood with a cul-de-sac that throws a Halloween potluck every year, for example, though as far as I know nothing nefarious has happened over there!

Q: Are you a plotter or pantser?
A: I don’t do well with outlines. I need to feel my way through a book with a blindfold on (though occasionally I guess I pull it down and try to get a glimpse of what’s ahead.) By this, I mean, I like to write a little, then figure out the next few “beats” or things that might happen, then write those, then figure out a little more, etc. And delete and rewrite and cry a little and doubt myself and think I’m the greatest thing since barbeque chips and start the whole process over again. And each time, so far, it’s ended up in a book, so fingers crossed!

Q: Any great tips for aspiring writers?
A: 1) Find your tribe 2) Learn to take criticism and rejection gracefully 3) Read. A lot. 4) Sign up for a monthly massage program.

Q: What is your favorite place to write?
A: It’s super boring, but my home office. I like to have control over my environment. I know writers who can write in coffee shops or libraries or outside, but I need to be at a desk in relative quiet most of the time. If it’s too noisy or too cold or there’s a chance that a spider will crawl on me, I can’t concentrate. That said, we have an excellent screened-in porch and I do like writing out there sometimes.

Q: Are you working on another book now or taking a break?
A: I’m working on my third novel, which is set in upstate New York at a winery and estate and features a group of old friends who return there for a reunion only to realize they are caught up in a decade-old revenge plot.

Q: What is your favorite season and why?
A: Hands-down: Fall. Sweaters! Crunchy leaves! Pumpkin everything! Football! Also, Halloween is my birthday, and I adore anything and everything spooky. So, there you go.

TARA LASKOWSKI is the author of One Night Gone, which won an Agatha Award, Macavity Award, and Anthony Award, and was a finalist for the Mary Higgins Clark Award, Left Coast Crime Award, Strand Critics’ Award, and Library of Virginia Literary Award. She is also the author of two short story collections, Modern Manners for Your Inner Demons and Bystanders, has published stories in Alfred Hitchcock’s Mystery Magazine and Mid-American Review, among others, and is the former editor of SmokeLong Quarterly. Tara earned a BA in English from Susquehanna University and an MFA from George Mason University and currently lives in Virginia.