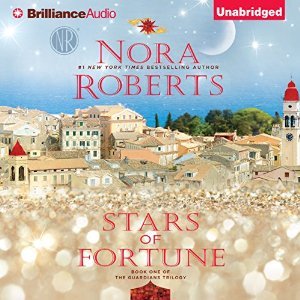 Sasha Riggs lives a lonely, solitary life as a painter in the mountains of North Carolina. When she becomes plagued by disturbing dreams that manifests into her art, she decides to give into the pull and ends up in Corfu, Greece. From there, she meets five people who will become part of her destiny, one of whom, Bran Killian, will mean much more.

I loved the mythology of this story, which forms the foundation for the tale. The quest is for three stars created many years before by three goddesses of light. They must find and reunite them before a powerful and evil dark goddess does so. Each of the six has unique gifts that are slowly revealed, adding a bit of mystique to the characters. While some are easier to figure out, most aren’t and I enjoyed the surprises. And, they’re pretty formidable.

Sasha at first appears to be the weak link of the group but that doesn’t bear out as the story progresses. I liked her sheer will, which was the impetus for a lovely transformation, emerging from her shell and gathering mental and physical strength from the other five. Bran was simply amazing! His skills were reminiscent of some other fantasy heroes of mine and that’s all I say on the matter:) Theirs was a sweet romance that culminated into something quite explosive.

I first read this story a few years ago and decided to reread it again before I listen to the final book in the trilogy, but this time on audio, especially since the narrator is one of my favorites. Her unique voices for each of the characters seemed to fit them perfectly, at least how I’d heard them in my own head. She helped make this a special listening experience.

This was more fantasy than I’d imagined and that was a wonderful discovery. I loved the other characters and their extraordinary gifts. The battles between the six and the dark goddess were well crafted, exciting and vividly described. It was even better the second time around and my original rating stands.