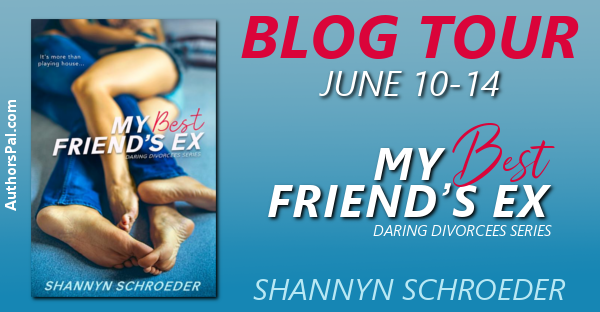 Trevor Booth’s life was just thrown a curveball. When his ex dies, he suddenly goes from an every-other-weekend, fun-time dad to a full-time dad. The dad part he’s cool with, but life with two teens is like a roller coaster in hell. Thank God his ex-wife’s best friend, Callie, seems to have secret powers that allow her to deal with the chaos.

Callie is devastated when Lisa dies, and she’s determined to help the kids get through it. She’s concerned about how Trevor will adjust to being a full-time parent, but she’s having a tough time keeping her eyes off his ripped physique. Callie loves being a part of this makeshift family, but no way she’s falling for her best friend’s ex.

Trevor Booth is a divorced father of two teenagers, the owner of his own building construction company and a recovering alcoholic. With the help of his divorce support group, New Beginnings, he’s managing his sobriety, testing the dating waters and being a good weekend father to his kids. However, when his ex-wife Lisa suddenly dies in a car crash, Trevor suddenly is thrust into being a full time dad with all that implies. Callie Larson was good friends with both Lisa and Trevor but Lisa won the friendship in the divorce. She steps up and in, helping Trevor get his footing and gives his children a soft place to land. And, at some point, they both seek solace in each other.

I loved that this is a romance between two mature (not old!) adults and all that entails. It didn’t mean there weren’t any problems or issues, just that they were meaty and substantive without easy solutions. It required both of them to make difficult self inquiries, develop insights and face compromises around ingrained behaviors. Their challenges weren’t extraordinary, just the stuff most people face in similar circumstances on a daily basis; adjusting to new normals and redefining relationships. I was hooked immediately and quickly warmed to these characters. Their commitment to creating family was at the basis of every decision. But, their romance was special as Callie doesn’t hold back or play games. It was refreshing to experience two people in a relationship with honest and open communication, almost to a fault.

I was a big fan of Schroeder’s O’Leary’s series and jumped at the chance to get into this one as it was also focused on family. No disappointments here, even though I started with the second book. I’m a stickler for reading in order but it wasn’t an issue (though I bought the first book for reference just to make sure😏). This story was tough to put down and I became completely absorbed in Trevor and Callie’s lives. It was impossible not to do so. I highly recommend the book and the first in the series, currently $.99 on Amazon! Callie needed a drink but knew Trevor wouldn’t have any alcohol in his house. She felt like a crazed woman, pounding on his door, but after overhearing Diane, she couldn’t let it go. She needed to talk to Trevor. She hadn’t expected to catch him dripping wet and mostly naked.

She felt ashamed for checking out her dead best friend’s ex-husband, but she was only human. Trevor had always been a good-looking guy, but he’d really aged well. The construction business kept his body built, and sobriety suited him. He had the bulky, toned muscle of a man who used his body every day. Unlike the gray she kept colored on her head, his sprinkling made him looked more distinguished, sexy.

Callie laughed at her ridiculous thoughts. God, how she wished Lisa were here. She’d laugh with Callie and tell her that it was always okay to look as long as she didn’t touch. Trevor was hers. Until he wasn’t. Because he’d screwed up. Callie’s laugh turned slightly maniacal.

Trevor came back into the room wearing low-slung sweatpants and a T-shirt. “Are you okay?”

She shook her head and took a deep breath. “Fuck no, I’m not okay. My best friend is dead, and you’re thinking about letting her crazy-ass parents take her kids.”

“And something about that was funny?”

“No.” She rubbed a hand over her face. Jet lag was kicking her ass, so her filter was on the fritz. “I was laughing because you opened the door in a towel and I was thinking how good you look, which made me feel guilty because you’re Lisa’s husband—ex-husband. And then I thought about what she would say about all of it, and the whole conversation in my head was a little sick and twisted.” After the words poured out, she inhaled deeply again.

“So it was basically laugh hysterically or cry.”

Shannyn is an occasional English teacher, who also works as a part-time editor while raising her three kids.

Even though she wrote from high school through college (mostly poetry), she’d never considered a career as an author. Writing fell by the wayside as she focused her energy on creating lesson plans and new and fabulous ways to torment her teen students. One group in particular dubbed her “The Torture Master,” a title she carried into motherhood.

After the birth of baby number two, Shannyn resigned from teaching and fell in love with reading romance novels. She read so many books so quickly that her husband teased, “If you’re going to read so many damn books, why don’t you just write one?”

That first book is safely buried on her hard drive, but the process set Shannyn on the path to where she is today. The 6-book O’Leary series has wrapped up, as well as 2 Hot & Nerdy new adult trilogies. She’s currently working on her next series.

She is recovering from her Diet Coke addiction, fears putting her foot in her mouth on social media, and has a renewed appreciation for the bad girls of the world.

Thanks to Author’s Pal for my complimentary copy. All opinions are my own.

6 thoughts on “My Best Friend’s Ex by Shannyn Schroeder”