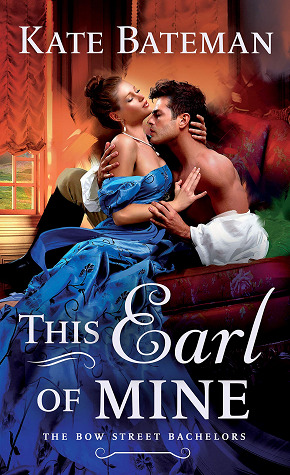 Georgiana Caversteed needs to be married to maintain her independence and to fend off a persistent cousin who only wants her fortune. She concocts a scheme to marry a convict headed for the gallows, which will allow her to be free to do as she pleases, spurn her cousin and continue running her deceased father’s fleet of merchant ships. It was a good plan but it went awry when she ends up married to Ben Wylde who was in Newgate Prison but is actually a Bow Street Runner working undercover. Instead of him being shipped off to Australia, he’s moving in her same social circles amongst the London ton.

The premise of this story is what drew me to the book and thankfully it lived up to that promise, surpassing my expectations. It begins right in the thick of things and I quickly learned that I was going to like both Georgiana (Georgie) and Ben. I’ve a fondness for these Bow Street Runners as they tend to bring excitement to a story and Ben does that and more. He’s flawed but has an honor code that I found admirable. Georgie is a mix of a bluestocking and an adventuress. Despite the limitations placed on her in this era, she’s a formidable businesswoman who I really liked.

Georgie and Ben’s developing relationship and romance is the main thrust of the story but there’s lots of excitement, intrigue and mischief. They don’t play games with each other, which makes for a more interesting story, especially as she’s experienced in all maritime matters and I learned a lot. Ben’s best friends Alex & Sebastian are also Runners and both were introduced here and set up for future books. I really enjoyed this story that seemed to offer so much more than a traditional romance and am excited about this trilogy. This is my first time reading anything by the author and I’m glad I took a chance. It’s a delightful story.

There were worse places to find a husband than Newgate Prison.

Of course there were.

It was just that, at present, Georgie couldn’t think of any.
“Georgiana Caversteed, this is a terrible idea.” Georgie frowned at her burly companion, Pieter Smit, as the nondescript carriage he’d summoned to convey them to London’s most notorious jail rocked to a halt on the cobbled street. The salt-weathered Dutchman always used her full name whenever he disapproved of some- thing she was doing. Which was often.

“Your father would turn in his watery grave if he knew what you were about.”

That was undoubtedly true. Until three days ago, en- listing a husband from amongst the ranks of London’s most dangerous criminals had not featured prominently on her list of life goals. But desperate times called for des- perate measures. Or, in this case, for a desperate felon about to be hanged. A felon she would marry before the night was through.

Georgie peered out into the rain-drizzled street, then up, up the near-windowless walls. They rose into the mist, five stories high, a vast expanse of brickwork, bleak and unpromising. A church bell tolled somewhere in the darkness, a forlorn clang like a death knell. Her stomach knotted with a grim sense of foreboding.

Was she really going to go through with this? It had seemed a good plan, in the safety of Grosvenor Square. The perfect way to thwart Cousin Josiah once and for all. She stepped from the carriage, ducked her head against the rain, and followed Pieter under a vast arched gate. Her heart hammered at the audacity of what she planned. They’d taken the same route as condemned prisoners on the way to Tyburn tree, only in reverse. West to east, from the rarefied social strata of Mayfair through gradu- ally rougher and bleaker neighborhoods, Holborn and St. Giles, to this miserable place where the dregs of humanity had been incarcerated. Georgie felt as if she were nearing her own execution.

She shook off the pervasive aura of doom and straight- ened her spine. This was her choice. However unpalat- able the next few minutes might be, the alternative was far worse. Better a temporary marriage to a murderous, unwashed criminal than a lifetime of misery with Josiah. They crossed the deserted outer courtyard, and Georgie cleared her throat, trying not to inhale the foul-smelling air that seeped from the very pores of the building. “You have it all arranged? They are expecting us?”

Pieter nodded. “Aye. I’ve greased the wheels with yer blunt, my girl. The proctor and the ordinary are both bent as copper shillings. Used to having their palms greased, those two, the greedy bastards.”

Her father’s right-hand man had never minced words in front of her, and Georgie appreciated his bluntness. So few people in the ton ever said what they really meant. Pieter’s honesty was refreshing. He’d been her father’s man for twenty years before she’d even been born. A case of mumps had prevented him from accompanying Wil- liam Caversteed on his last, fateful voyage, and Georgie had often thought that if Pieter had been with her father, maybe he’d still be alive. Little things like squalls, ship- wrecks, and attacks from Barbary pirates would be mere inconveniences to a man like Pieter Smit.

In the five years since Papa’s death, Pieter’s steadfast loyalty had been dedicated to William’s daughters, and Georgie loved the gruff, hulking manservant like a second father. He would see her through this madcap scheme— even if he disapproved.

She tugged the hood of her cloak down to stave off the drizzle. This place was filled with murderers, highway- men, forgers, and thieves. Poor wretches slated to die, or those “lucky” few whose sentences had been commuted to transportation. Yet in her own way, she was equally desperate.

“You are sure that this man is to be hanged tomorrow?” Pieter nodded grimly as he rapped on a wooden door.

She shouldn’t ask, didn’t want to know too much about the man whose name she was purchasing. A man whose death would spell her own freedom. She would be wed and widowed within twenty-four hours.

One print copy of This Earl of Mine (US only) to a randomly selected commenter. The giveaway ends on November 4.

Kate Bateman, (also writing as K. C. Bateman), is the #1 bestselling author of historical romances, including her RITA® nominated Renaissance romp, The Devil To Pay, and the novels in the Secrets & Spies series To Steal a Heart, A Raven’s Heart, and A Counterfeit Heart. When not writing novels that feature feisty, intelligent heroines and sexy, snarky heroes you want to both strangle and kiss, Kate works as a fine art appraiser and on-screen antiques expert for several popular TV shows in the UK. She splits her time between Illinois and her native England.

(Thanks to St. Martin’s Paperbacks for my complimentary copy. All opinions are my own.)

6 thoughts on “Release Day Blog Tour & #Giveaway: This Earl of Mine by Kate Bateman”