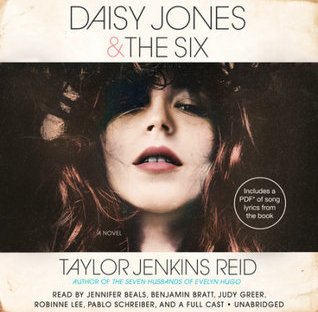 This is the story of Daisy Jones, a young girl with an amazing voice and presence, and The Six, a rock band coming into its own in the late 60s, early 70s. Daisy is a bit of a free spirit who wants to write and sing her own songs though she’s very deeply immersed in the drugs of that era. The band is informally led by its chief songwriter, Billy Dunne who has his own challenges. The group and Daisy Jones disbanded at the height of their fame and the story chronicles, in documentary style, their origins and what happened to have them walk away from their success.

I listened to this book and if ever there was a time to choose the audio version, this is that story. With a full cast narration, the performances are outstanding and lift this compelling story to the highest level. I was hooked five minutes into the book and very quickly felt like I knew all these characters (and there are a lot of them!). Though some paths are predictable because, well, it’s a rock band in the early 70s, for the most part, the journey meanders rather deliciously towards the unknown. I kept waiting for Daisy to crash and burn but there’s a tragic resilient quality there that had me rooting for her, even when her redemption was unlikely. Billy’s relationship with his soulmate Camila is unlike most you see in this music arena though it reminded me somewhat of June Carter and Johnny Cash but she’s not a performer. Camila, however, emerges as one of the most important characters in the story. When Daisy connects with The Six, it gets complicated.

I absolutely loved this story! The characters were fascinating and what was most interesting was being able to experience the relationships in the band transition as they became more successful. Some were more complicated than others and all unique in their own way. But, at the forefront are Daisy and Billy. There’s a little surprise in store at the end that I never saw coming. I thoroughly enjoyed the listening experience (check out the book description for the full cast list), the story, the vividly drawn characters. Taylor Jenkins Reid is now on my auto read list because I’m loving her writing style.

42 thoughts on “Daisy Jones & The Six by Taylor Jenkins Reid”