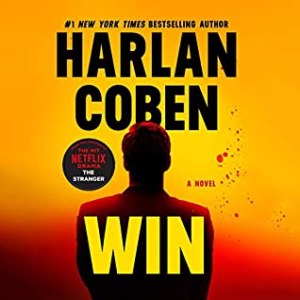 More than twenty years ago, Windsor (Win) Lockwood’s first cousin, Patricia, was abducted during a robbery of her family’s estate. She was found five months later but her kidnappers were never identified or caught. When a recluse is found murdered in his penthouse apartment on the Upper West Side of Manhattan, they also find some of the stolen items from that robbery with his remains. Additionally, they find one of the two priceless pieces of art Win’s family had on loan at a university that was also part of a theft years earlier. One item in particular, however, points to Win who has no idea how it ended up in the home of a man who they later identify as a most wanted domestic terrorist from decades ago.

If you’re a fan of the Myron Bolitar series, you already know and probably love Win Lockwood as I do so I was elated when news of this book and series was announced. If you’re unfamiliar with this character or that series, it doesn’t matter as Win is presented perfectly to both audiences. He’s not changed and I loved learning more about his family and origins, even though there is still more to discover about this enigmatic character. The mystery was thorny and if all of these elements weren’t complicated enough, Win is also dealing with the consequences he created through his singular sense of justice in another situation. There are a lot of balls in the air to juggle but I didn’t have any problems keeping up or assimilating all of the clues.

The story far surpassed my expectations, which were high and the reason I delayed listening to the book. Speaking of listening, Steven Weber nails Win! If you have the option of getting the audio version, grab it because his performance was exceptional at every level. Yes, he’s one of my favorites, but still. Win isn’t your traditional hero or role model and I’ve often questioned why I find him so appealing. Maybe it’s his authenticity, loyalty to friend Myron Bolitar and fearlessness. Who knows but I’m a diehard fan and think you will be, too. And, the author’s signature twists (there were several) just made this a stellar reading/listening experience. I’m excited for what may come next in this series.