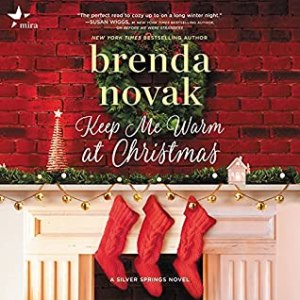 Tia Beckett is a Hollywood starlet whose career was just beginning to soar when she was involved in a devastating car accident, leaving her face scarred, maybe permanently. She retreats to her producer’s secluded guest house at his home in Silver Springs to recover emotionally and avoid the paparazzi. Unfortunately, her producer has also opened up the main house to another friend, artist Seth Turner. He’s home for Christmas and to teach a workshop for students at New Horizons, his mother’s school for troubled teens. Seth has his issues, too, as he’s still dealing with the loss of his wife who died a few years ago. Both of them have to find a way to coexist in the meantime.

This is a rather poignant story where two people are trying to find their way out of personal suffering. There are times when Seth gives Tia needed support in the moment to lift her out of self isolation and occasions when she offers him a shoulder and ear for his issues. It felt like destiny at times without being overly predictable. They both had their flaws but had good hearts with the best of intentions. I liked them individually and as the eventual couple they evolved into.

The story isn’t without conflicts as Tia’s privacy is threatened by a paparazzo looking for that one picture to reveal her injuries. Seth is also dealing with difficulties involving his former in-laws. It just made for a more compelling story without detracting from the loveliness of the burgeoning relationship, the spirit of the season and the sense of community. I love returning to this town and this was a wonderful addition. I listened to the story and the narrator is the voice of the series. Her storytelling skills enhance the experience and I liked her characterizations of Seth and Tia. I’ll always opt for the audio version because of her performance.

HarperAudio US · KEEP ME WARM AT CHRISTMAS by Brenda Novak

New York Times bestselling author Brenda Novak has written over 60 novels. An eight-time Rita nominee, she’s won The National Reader’s Choice, The Bookseller’s Best and other awards. She runs Brenda Novak for the Cure, a charity that has raised more than $2.5 million for diabetes research (her youngest son has this disease). She considers herself lucky to be a mother of five and married to the love of her life.