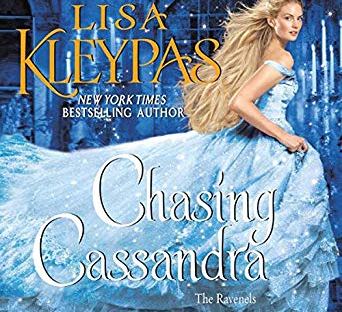 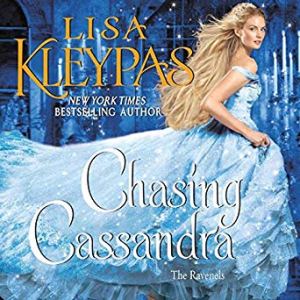 Lady Cassandra Ravenel is at loose ends now that her twin has married. She’s disillusioned about her own prospects to find a suitable husband among the current crop of men during the season and fears she’ll never find love like her sisters now experience. As she’s sharing her sorrow with West, her cousin, in a private room following Pandora’s wedding reception, guest railroad magnate Tom Severin let his presence in that room be known and offered himself for consideration. He was dead serious but his friend West dismissed him with vigor. Cassandra was appalled…but intrigued by this man who she barely knew. And here began the chase.

Tom was introduced at the beginning of this series and he’s proven himself to be ruthless in his business dealings, almost swindling the Ravenels out of the land mineral rights that ultimately saved their estate. Though he’s friends with Devon & West Ravenel and Rhys Winterborne, they’ve always seen him with clear eyes. I didn’t think this character could be redeemed but remembered I’d said the same thing about Sebastian St. Vincent (Wallflowers) so I wasn’t too surprised when my own heart warmed to him. I really liked Cassandra, who stood firm in what she wanted in a partner and even though she wanted Tom, he refused to offer her his own love. Obviously this man had a lot of layers borne from a painful past and unraveling them throughout the story was highly interesting. I liked that these two made it clear from the start that they wanted each other and their relationship journey was one of shared intellect and true interest in each other. Theirs was no instant match and the pleasure was in the chase.

Mary Jane Wells continues to surprise me as she created a unique voice for Tom that was perfect for the man I saw as cold and clever. And, there’s a young boy named Bazzle central to the story that she made even more delightful. Again, she gave all these characters vibrant life.

I was daring the author to try and redeem Tom Severin and she took on that challenge and delivered solidly. He wasn’t an easy man to like and by contrast Cassandra was quite the opposite, which made their romance even more special. Young Bazzle served as a mirror image of the young Tom and that provided a heartwarming element that helped to open up Tom and face the pain of his past. I loved everything about this story and hated when I reached the end. Listening to it just made it even better.