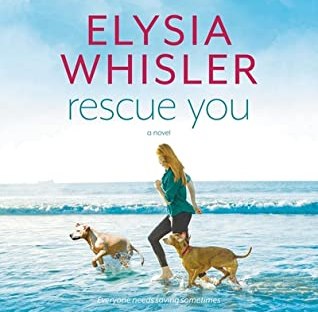 Constance Morgan hasn’t been herself since her father died and her boyfriend broke things off. She finds it difficult to do much more than help out at her sister Sunny’s animal rescue organization, Pittie Place. At Sunny’s prodding, she decides to attempt a spin class but is drawn to the gym across the street, Semper Fit, run by former Marine Rhett Santos. It’s a CrossFit regimen that is daunting but Constance reluctantly gives it a try, attracting Rhett’s attention as it’s obvious everything about this form of fitness is new to her. Who knew this would be a life changing moment for the both of them.

Constance is so relatable as she was her father’s caregiver until his death and it was a double blow in the aftermath, especially when her lame ex-boyfriend didn’t stick around. It’s easy to retreat from the world as you succumb to the grief, sorrow and loss when your focus for living goes away. Even though she’s a gifted massage therapist with a unique ability to connect intuitively with people, she’s no longer using that gift. Rhett is not an easy man, suffering from his own issues related to his last deployment. Workouts help him manage his anxiety but he also deliberately maintains distance from just about everyone…until Constance. Their connection was remarkable and rather lovely. It took some time for their relationship to develop and it did organically. Constance’s gradual change to emerge again among the living was heartwarming and her influence on Rhett spurred his reawakening. They rescued each other.

This story required quiet understatement and the narrator certainly delivered a performance that was a perfect fit. I enjoyed her soothing tone and storytelling skills.

There was a secondary storyline involving Sunny and her rescue organization that was just as intriguing as Constance and Rhett’s. It involved a disreputable dog breeder and her abuse of these animals both angered and saddened me. But Sunny’s refuge provided a much needed balm and I fell for several of these pooches with their adorable personalities. There’s quite a bit of detail about the fitness sessions I found tedious at times but there is so much more to love, more than overcompensating. Highly recommend this for anyone who loves a good story involving precious dogs and the people trying to save them along with themselves.

HarperAudio US · RESCUE YOU by Elysia Whisler

18 thoughts on “Rescue You by Elysia Whisler @ElysiaWhisler #LisaLarsen @HarlequinBooks”