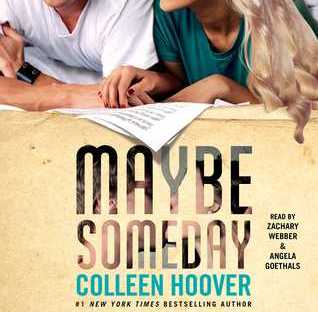 Sydney Blake is a 22-year old college student with a side job, a roommate who’s her best friend and a boyfriend who adores her. She’s also begun an unusual relationship with the musician occupying the apartment across from hers as he practices his guitar on the balcony while she makes up lyrics to his songs. She believes she’s living her best life until she discovers her boyfriend is cheating on her with her roommate. Sydney suddenly finds herself homeless and heartbroken until her balcony friend, Ridge Lawson, rescues her and invites her to share his apartment with his other two roommates.

All of this info is shared within the first chapter and as I went into the story “blind,” I’ll let you make that choice, too, if you’re so inclined. I won’t share anymore details.

I really loved this story and couldn’t get enough of it. Music is a major component as Ridge is a songwriter and Sydney’s collaboration made this a joyous experience if you love music. Theirs is a special relationship with major complications. His roommate Warren is his band’s manager and his best friend who revels in planning inventive pranks. Roommate Bridgette is his “sort of” girlfriend and is…mean. That’s not a perception as it’s acknowledged by everyone, including her. This household makes for an interesting brew and there are others who add significant conflict.

The story is told from both Sydney and Ridge’s point of view and the narrators of the audiobook gave their voices such strength. It was perfection. There’s also a musical soundtrack that accompanies this story and I encourage you to take a moment to listen to the songs recorded by Griffin Peterson. The title soundtrack is included below. This was just a wonderful story that’s messy, complicated, heartbreaking and exhilarating throughout.