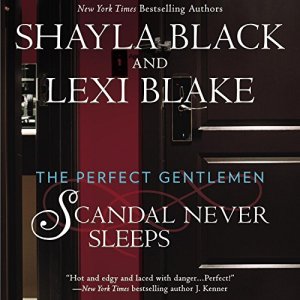 They are The Perfect Gentlemen, a moniker given six men who formed their friendship when they were teens at Creighton Academy, a private school boasting that they only turned out “perfect gentlemen” (they’re anything but!). It’s now 22 years later and they’re all highly successful but gathered together to bury one of their group, Maddox (Mad) Crawford, the one who bonded them in school and beyond. He died mysteriously in a plane he was piloting.

This is Gabriel (Gabe) Bond’s story. He’s the owner of an aeronautics company and is responsible for overseeing Mad’s company until an orderly transition is effected. On the evening of the funeral, he meets Everly Parker in a bar and the two of them end up spending the weekend together. However, neither knows who the other really is until he shows up that Monday at Crawford Industries where she’s head of IT security. Unfortunately, the rumor mill is that she was Mad’s lover, which incenses Gabe because his sister was involved with Crawford until he suddenly left her, emotionally destroyed and pregnant. Things deteriorate from there.

The friendship between these men sets the perfect tone for the start of this series. They’re all very different but what they share is a fierce loyalty to each other and a drive to excel at what they do. It soon becomes clear that Mad’s plane crash was no accident and the answers lie somewhere in his company and the people surrounding him there. While Gabe and Eve’s weekend tryst was passionate and full of future promise, all that disintegrated including the trust they’d created in that “one night stand,” once their identities were revealed. It was a constant source of conflict, understandably, but I felt Gabe took things too far at times and it made him a weaker character. There was sort of a rinse and repeat that made me weary of it all.

I liked the romance, didn’t love it, but I was taken with all the mystery, suspense and intrigue. This first book created a good foundation for what comes next with strong character development for the remaining friends’ stories. I listened to the book and Kaleo Griffith delivered his usual stellar performance, managing to provide distinction for each of the gentlemen. While not a perfect start, it was good enough. Part of the mystery ended here but there’s a continuing arc that I suspect will carry on through the final book.