*This should be read before beginning When I Found You, Silver Springs #8. Just skip to track #31 in the audiobook.

I actually forgot to read this prior to their follow up story in the Silver Springs series but it was included as a bonus story at the end of that audiobook. The events of this book are referred to in that one but it all worked out fine.

Natasha Sharp has been in love with Mack Amos from the moment she met him when her mother married his father when she was a teen. But he was nine years older and did the right thing by keeping her at arm’s length, despite her best efforts. It’s now years later and she’s a doctor working in Los Angeles, home for the annual Victorian Days celebration. When she encounters Mack there, and for the first time, he looks at her as a possibility.

This was short but perfectly set up the follow up story in Silver Springs. It’s a turning point in Mack and Natasha’s relationship with surprising results. I was glad to get the background on this encounter as it was referred to often. 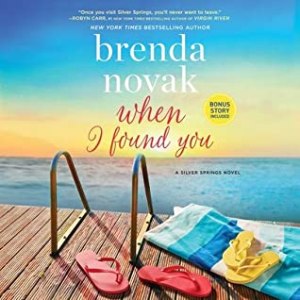 Dr. Natasha Gray is relocating to Silver Springs, California after losing her pediatric practice, financial stability and deadbeat husband. She and her 6-year old son, Lucas, are starting over in this new town and she’s going to be the nurse at the New Horizons Boys & Girls Ranch. She’ll be underemployed but it’s a chance for a fresh start. Mack Amos, the man she’s loved since she was a teen, has helped her move to the rental that needs more than a little work, which has him extending his stay to help her get set up.

Natasha and Mack were first introduced in the crossover series, Whiskey Creek, but they never had significant roles in the stories except for the novella, Home For the Holidays, which I recommend reading first. I forgot but it was included as a bonus story at the end of this one (yay!) and it worked out just fine. The events from that novella are adequately covered in this story but I enjoyed listening to what happened first hand.

Natasha first met Mack when her mother married his father. Mack and his siblings were essentially raised by their oldest brother when their father was sent to jail. Natasha’s mother left a lot to be desired and the Amos brothers helped raise Natasha, who as a teen fell madly for Mack. He was nine years older and kept her at arm’s length until years later. Now there’s no excuse for them to be apart except she isn’t willing to risk her bruised heart again. This was the first time these two spent any quality time together as equal and somewhat willing adults so this felt like a new romance as opposed to a second chance one. Mack’s a great guy who bonded with her son and worked hard to prove his feelings for Natasha. She had to overcome some major hurdles, including an emotionally abusive ex-husband and a drug addicted mother. I enjoyed the story, especially on audio as the narrator handled the characters well and moved the story along nicely. And, an open ended issue from Whiskey Creek finally got resolved here. I’m such a fan of the series and it was good to return to the town and crossover characters from another beloved one.

HarperAudio US · WHEN I FOUND YOU By Brenda Novak

22 thoughts on “Audio Reviews: Home for the Holidays & When I Found You by Brenda Novak”